“You are not going to believe what you’re about to see,” said director Fred Durst to introduce the L.A. premiere of his film The Fanatic at the Egyptian Theater on Aug. 22, 2019. “It wouldn’t have happened without John Travolta. He is the superstar,” Durst continued, with Travolta at his side. 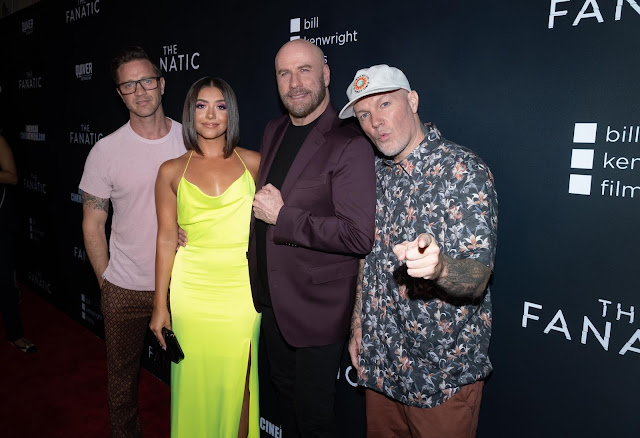 “It all started years ago with Fred’s idea,” Travolta said during the Q&A following the screening, adding that he contacted a few friends to finance the film for a small budget. “It can happen. We got it done,” Travolta said.


Durst recounted that the idea was born when he was out to dinner with his co-writer Dave Bekerman, and a waiter they particularly liked asked Durst for his autograph. Durst and Bekerman spun out a story of what someone who collected celebrity autographs might be like. The script was a dark comedic thriller about a fan obsessed with a famous actor.

Travolta said, “We ALL have it, that celebrity we love and the dream that they would love us back. We all identify with that.” That formed the basis of Travolta’s character, Moose. Then came the fun of building the character. “That’s why we’re here. We love to act.”

There came a time in his text messaging with Travolta when Durst realized that he was no longer communicating with John Travolta. He was communicating with Moose. When Travolta arrived on the set the first day, he was Moose. Durst knew that the minute he saw him. “John was Moose.” Travolta stayed in character throughout the 17-day shoot.

Bill Paxton was originally cast in the role of the celebrity actor and the film is dedicated to him. When Paxton died from complications during heart surgery, Travolta suggest Devon Sawa to play the part. Durst was in Birmingham, Alabama at the time, so Sawa had to send him an audition tape. “I put the whole damn thing on tape,” Sawa laughed. He sent it to Durst, who quickly saw he had the character down cold, including all the lines off-book. But Durst toyed with Sawa when he called. Durst said, “I loved the tape and wish you luck in your future.” Sawa thought Durst was passing on him, but then Durst laughed and offered him the part.

For the part of Leah, Durst needed an actor who would be believable as a friend to the lovable but limited Moose. “We were getting a lot of interesting people thrown at us, but I didn’t want to settle,” Durst said. At the last minute, he found Ana Golja.

Golja recalled that when she met Durst she was in full makeup with perfectly-coiffed hair. Gorgeous, but “I didn’t look anything like Leah.” Golja changed clothes, toned it all way down and taped two pages of material, which Durst sent to Travolta. Golja got the part based on the audition tape. Durst praised Golja’s performance: “I always believed Ana’s relationship with Moose.” Travolta added that he appreciated “the beautiful choices she made caring for Moose. She responded to his vulnerability.”

A lengthy climatic scene where Moose has tied his idol to his own bed challenged everyone. Durst found it difficult to shoot in such a tiny room with so much action in just five days. “The scene on that bed went on for hours. I was on that bed for days,” Sawa said. Travolta surprised Sawa with a variety of improvised actions. He jumped on Sawa’s chest and did an imitation of Pennywise the Clown. As Moose, he felt like crawling in bed with his idol - so he did, much to Sawa’s surprise. In an earlier scene, Travolta kisses Sawa’s forehead. “I felt a wetness,” said Sawa, again surprised by the great actor’s choice. Travolta even imitated LL Cool J’s rapping on the set — and in the Egyptian Theatre, to the audience’s delight. “I loved working with John Travolta like that,” Sawa concluded. 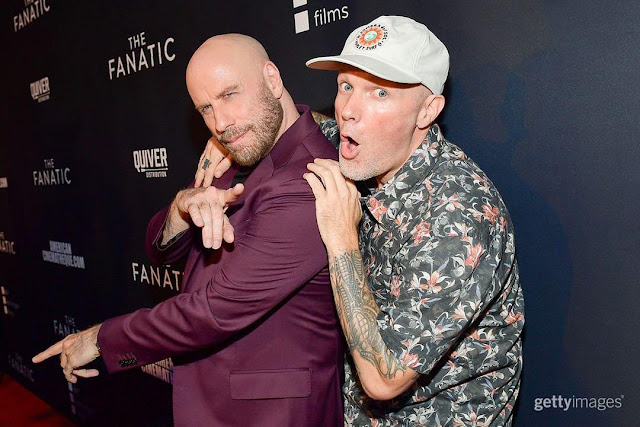 Travolta shared that he likes working in independent films because “the independent movie is freer. It lets us go outside the norm. I grew up when story and character and acting were central. It’s different now and I was happy to get back to that.”

“Casting is 90 percent of movie making,” Travolta observed. The great directors he has worked with like Tarantino and Altman “just let you go. The more the director does that, the more outside the box we can go. We never felt like we were making a bad or wrong choice, just a different choice. That is so important to the actor.” He concluded with a compliment to Durst: “Fred really excelled at that.”

“I feel like an actors’ director,” Durst replied. “I do character-driven pieces.”

Durst began his career as a musician with the band Limp Bizkit. His musical background shines through in The Fanatic. He knew David Fincher and Martin Scorsese had directed music videos, so he thought he could achieve success as a film director if he started in music. In fact, Fincher helped him transition from music to movies. “If it wasn’t for Limp Bizkit, I never would have had this opportunity,” Durst concluded.

The director said he sees The Fanatic as a comment on celebrity. “You need to be a great celebrity if you put yourself out there in that way,” Durst said. He noted that the character of Hunter was a great father, a successful actor, but a bad celebrity. So in the end, the audience ends up rooting for Moose.

The evening closed with questions from the audience, most directed to Travolta.

"The actors I would most like to work with in the future? Myself - I would like to direct a movie and act in it too," Travolta said. "And I really like the work of Sam Rockwell. I like people who change it up, go for it fully like he does. Sam is one of the actors who really builds a character like it was done in the past."

He also recounted two startling experiences he'd had with his own obsessive fans: a girl who hid in his closet scared him when she jumped out, and a man once interrupted a family dinner.