“It’s more about the silence than the in-your-face effects,” commented Bryan Woods about writing and directing horror films. No one can say that with more authority than Woods and his long-time writing partner Scott Beck - they wrote the script for A Quiet Place (2018). “Sound design is as important as anything,” Woods concluded. 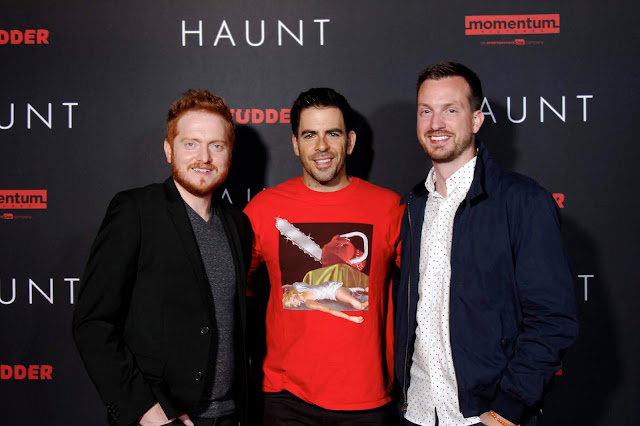 Woods and Beck appeared in-person for a Q&A following an advance screening of Haunt (2019) on September 7, 2019 at the Egyptian Theatre. Woods and Beck teamed as directors as well as screenwriters on Haunt. Eli Roth, one of the film’s producers, moderated the discussion. A screening of A Quiet Place capped the evening.


Woods and Beck have known each other for 20 years. They’re in-sync. They grew up in the same small Iowa town, seeing the same movies. “We thought we should see Dead Poets Society (1989), but Friday the 13th Part VIII sounded so much cooler,” laughed Beck.

Regarding their creative process, they shared that they tend to start with concept, then transition to theme. For Haunt, a producer requested a film about a Halloween haunted house. "We asked ourselves, 'What is Halloween about?' It’s about wearing a mask and pretending to be someone you’re not." This train of thought resulted in Harper, the main character in Haunt. Harper is introduced at a mirror putting on makeup to disguise the black eye her abusive boyfriend gave her so that no one would know about it. The theme of putting on a mask, a false face, to meet the world is established from the start.

A Quiet Place, similarly, began with the concept of, “you make a sound, you die,” and went on to explore silences and unspoken tensions in families.

Woods and Beck remembered the haunted houses that sprang up in their Iowa hometown every Halloween. Abandoned warehouses were transformed into scary labyrinths and local actors played Halloween characters: assorted ghosts, monsters, vampires, zombies, murderers and witches. These shared memories became the basis of Haunt.

“I was blown away by your camera work, by your use of negative space,” Roth told the directors. “The camera work and directing is so important.” 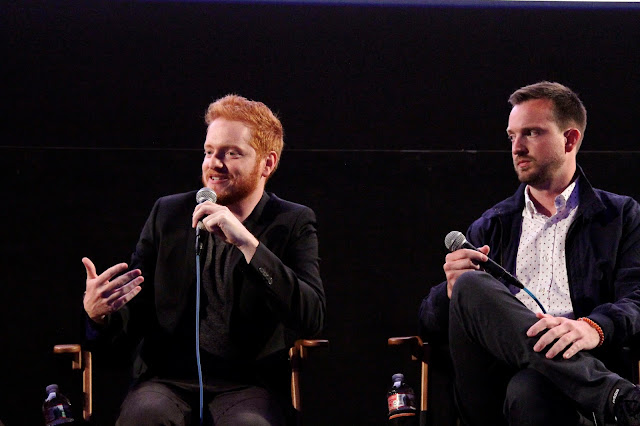 Woods turned the compliment around, looking at Roth and saying, “Haunt is very much an Eli Roth production. First and foremost, Eli, everything we directed was from watching your work.”

All three men readily agreed that it is a tough task for a director to make a film on a small budget that looks good. Beck and Woods were quick to acknowledge the key role of art director Austin Gorg. Gorg is known for such films as La La Land (2016), The Neon Demon (2016) Midnight Special (2016), and Her (2013), as well as top television work. Beck emphasized how thrilled they were to get him for the movie. They talked with him about Mario Bava. They told him what they wanted for Haunt was that gorgeous, Italian giallo horror look—the evocative colors, the operatic sensibility.

What Woods and Beck wanted in terms of casting and characterization was the Richard Linklater ensemble style, as in his Dazed and Confused (1993). They discussed this with their casting director, Nancy Nayor.

“Acting - this is what it takes to make a movie,” Beck continued. He said the cast for Haunt had “such a spirit.” When one actor was on-camera, the off-camera actor would do the full performance of their character for the benefit and support of the on-camera actor, even though that off-camera performance obviously would never be seen. “You gave us characters we care about,” concluded Roth.

One of the unique aspects of casting Haunt was the use of local actors for the monsters that populate the haunted house. “That’s creepy!” exclaimed Roth with a chuckle. “The actual manager of the Waffle House is a serial killer!”

Casting the lead monster, Clown, was challenging. Justin Marxen was someone Woods and Beck had known for a long time. Marxen really wanted the part and auditioned four times. Woods and Beck said they just couldn’t get past the Justin they knew. They called in someone who didn’t know Marxen to watch him audition, and that person hired him on the spot. 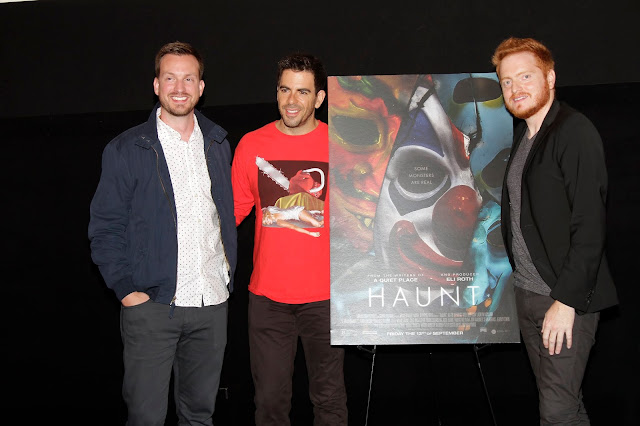 Beck and Woods don’t have a lot of conflicts over the 21-day shoot; they commit to resolving disagreements among themselves before they present anything to a third party. They wrote the scripts for Haunt and A Quiet Place at the same time and didn’t expect either one to get made. “No one was asking for a quiet movie,” Beck recalled. They decided a long time ago (they have written about thirty scripts) to write what they feel passionate about rather than to cater to the market.

After the stunning success of A Quiet Place, producers offered to buy their next script off just a logline. “We said no,” Woods reported, although he worried that they might regret that. They decided to write the script they wanted to write and then show it to the producer, instead.

Roth closed the discussion of Haunt with a producer’s accolade: “All the money is on the screen.”