MIKE LEIGH BRINGS PETERLOO TO THE AERO, by Judith Resell 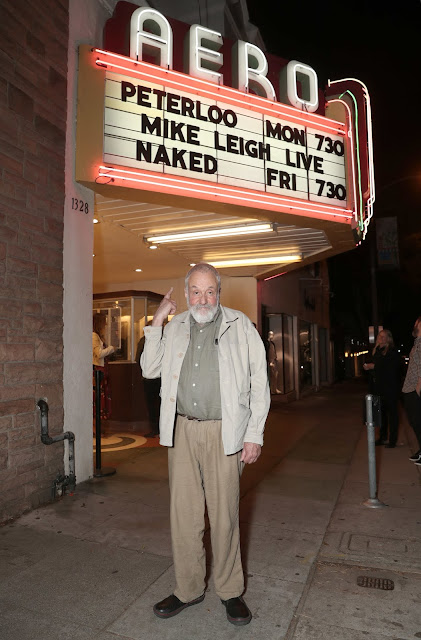 “My object is to put on the screen a world you can believe in,” explained director Mike Leigh at a screening of his historical drama Peterloo (2018) at the Aero Theatre in April. “A real, mortal, organic, living world.” Leigh discussed his latest film on the first night of a tribute to his work. He received a standing ovation for Peterloo and his outstanding body of work.

“Many of us grew up not knowing about [the events at Peterloo],” Leigh commented.  Although he went to school in a town that was only a bus ride away from Manchester, the place where the events of Peterloo took place, he never learned what it was or where it happened. “It’s an enigma,” he said. No one really knows why the historic tragedy was so little-known for so long; at St. Peter’s square, a peaceful assembly of thousands of men, women and children demonstrating for universal suffrage was brutally attacked by soldiers on horseback, leaving many of the unarmed civilians dead.

When Leigh first read about Peterloo, he thought, “someone should make a movie of this.” He never dreamed that someone would be himself. “Gradually, in 2014, I started to do it,” Leigh recalled. “What we couldn’t know in 2014 was that so much would change all over the world in terms of democracy—certainly in the UK.”

Quite a few of the characters in the film are actual historical figures, Leigh shared. Fictional characters such as the working class family impacted by the events of Peterloo are very much informed by research on how people lived then.  In the end, Leigh concluded, all of the characters have to be presented in the same way: as three-dimensional and detailed. 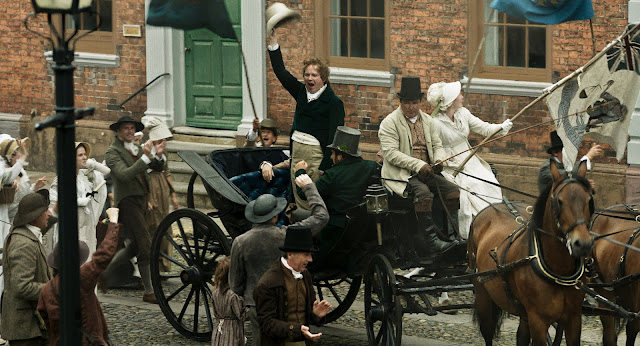 “Have you ever though of doing a film in a more conventional way—sitting a room by yourself writing a screenplay and bringing it to actors?” moderator Jim Hemphill asked Leigh.

“No,” Leigh answered. Then, after a pause: “There is no doubt in my mind the result of that wouldn’t be as good.”

“Not one frame of it was shot in Manchester,” Leigh chuckled when asked how much of the location shooting was at the actual site of the massacre. During the reign of Queen Victoria, Manchester was rebuilt as a great Victorian city with none of the Regency period features of the time of the story. So Leigh “shot all over the place” in northern England to find buildings and settings that had the right look. The biggest question was where to shoot the climactic massacre scenes. Tilbury Fort, built by Henry VIII, was finally located and chosen.  Leigh’s crew built a row of houses for the working villagers and also relied on CGI renderings.

In the end, Leigh commented, it was about setting it all up with the freedom to make it real. “When I was a kid I went to movies and they were real to me. I want you to believe in it. If you make a film set in the seventh century, it’s very hard to find out how people spoke and lived. But two hundred years ago, in the Regency period, it’s very well documented in plays, novels, newspapers, even caricatures. It’s all very researchable, really,” Leigh concluded.

The film's court scenes shed light on how draconian the legal system was vis-à-vis the lower classes. “The Tory government of this period was the most oppressive ever,” Leigh said, noting that the film presents real cases, such as that of one man hanged for stealing a coat. These dramatic scenes were shot in an ecclesiastical court inside the great cathedral at Chester.

The color palette for the movie was drawn from era-appropriate  paintings, especially those by J.M.W. Turner. “We did not reference [Johannes] Vermeer, but it just wound up looking like it,” Leigh noted. 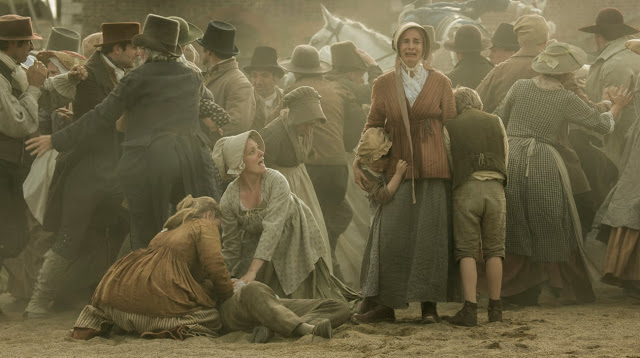 “A film is made in the editing room,” Leigh asserted when asked about his post-production process. “Jon Gregory, my editor, really did a great job.” Leigh shot a tremendous amount of film. He would leave it with Gregory on Thursday, return on Tuesday and Gregory would give him an edited version for his approval. Leigh’s reaction to the edited versions was always, “Wow!”

One audience member asked about the role of speeches in the film. “My job is to show people doing what they do—making speeches, communicating ideas. What are the elements leading to the massacre? It is a risk. I refuse to patronize an intelligent audience,” he concluded.