Steve Taylor, the grandson of screenwriter, producer and director Stanner E.V. Taylor, a frequent collaborator of D.W. Griffith’s, was on hand to discuss his grandfather’s life and career Saturday night at Retroformat, held at the Egyptian Theater.  Steve recently started investigating his grandfather's life, so some parts of Stanner's past were a bit hazy, though he hopes he will continue to uncover more information in the future.
﻿
Stanner was a newspaper man in St. Louis in the early 1900s. He married Steve's grandmother in 1903, and the next year, Steve's father was born. This was right in the middle of the World's Fair in St. Louis, which lasted eight months and boasted an attendance of 20 million people. With motion pictures a brand new form of entertainment, naturally they were present at the fair: Thomas Edison was showing off his new wares, and the company that shot the opening ceremony of the fair just so happened to be the American Mutoscope and Biograph Company, which Stanner eventually did some work for a few years later.


Steve wasn't sure if his grandfather attended the fair and saw any of Biograph or Edison's exhibits, but two years later, Stanner and his wife were on their way to New York. There, Stanner worked as a freelance writer before landing a job at the New York Herald. During the evenings, he wrote plays. Shortly thereafter, Stanner ran into someone from the Biograph Company at a diner. They got to talking, and the man suggested Stanner write some scenarios for them. Stanner started working for Biograph as a scenario writer in 1907-08.


Around the same time, Griffith and actress Marion Leonard joined the studio. Stanner penned 1908's The Adventures of Dollie, the first short Griffith ever directed. Meanwhile, Stanner's father-in-law visited New York from St. Louis to see his daughter and grandson were living. Apparently he didn't like what he saw and returned to St. Louis with the two of them in tow. Steve said that was the last his father ever saw or heard from Stanner again. Steve's father was about four years old at the time.  Years later, in the mid-1920s, Steve’s father tried locating Stanner and wrote to a Sam Taylor in Hollywood, who told him he had the wrong man and actually gave him an address for Stanner. He tried a few times to get in touch with Stanner, but he never received a reply.


From 1908-1910, Stanner wrote about 64 scenarios for Biograph, most of them for Griffith, including In Old California, which is the first movie (short) ever made in Hollywood, in 1910. 1910-1911 were transitional years for Stanner and Marion Leonard, who at some point became Stanner's second wife; they fell in love after working so closely together at Biograph. Both Stanner and Marion also worked for several other companies during this time, and they tried to capitalize on Marion's popularity as an actress while Stanner transitioned into producing and directing.


Stanner and Marion created the Gem Motion Picture Company in 1911. The first release was supposed to be in January, but the company ran into trouble with Thomas Edison and copyright restrictions; Edison was patenting sprocket holes, and it’s hard to make a movie without those! Edison ended up with 26 of Gem’s films and the company soon folded. However, the duo rebounded quickly and formed the Monopol Film Company in 1912 to make films on their own.


1912-1913 was Stanner and Marion’s heyday, according to Steve. In November 1912, the couple left New York in a four-car train and traveled cross-country with a party of around 20, including actors and technicians. They even had a motion picture lab and sets on board, all ready to break ground in California. Two days after their arrival, Stanner leased some property and they got to work. The company even created a circular stage so they could keep the camera and lights in one place and simply rotate the sets.


After this, Steve is unsure of what happened to Stanner and Marion. The duo apparently had 30 scripts in the pipeline and plays written, but they only ultimately produced eight films for Monopol. By the end of 1913, they filed for bankruptcy and returned to New York. There, Marion filmed eight more movies before retiring in 1915. Stanner kept working in the industry for another 10 years, collaborating again with Griffith, and in 1926 the pair moved to Los Angeles for good. They pulled together resources to make one last film, 1926’s The Miracle of Life, which Stanner directed, but it was a flop. Three years later, in 1929, Stanner penned his last script, The Red Sword. 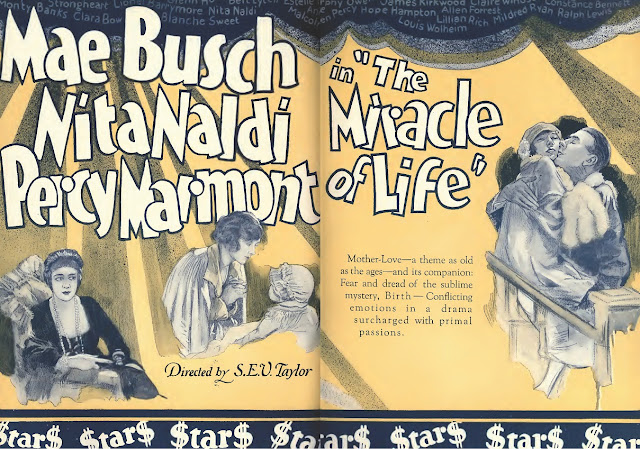 
As a special treat, Tom Barnes brought a short that Stanner wrote for Marion from 1912 called The Conflict’s End that he screened that night in between the Griffith shorts. Despite his disclaimer that his research was in its early stages, Steven delivered an entertaining and informative presentation that will hopefully shine a spotlight on Stanner's work.
Posted by American Cinematheque at 11:26 AM
Email ThisBlogThis!Share to TwitterShare to FacebookShare to Pinterest
Newer Post Older Post Home