"IT'S BEEN SURREAL": A BUÑUELIAN BALL, by Gretchen Husting 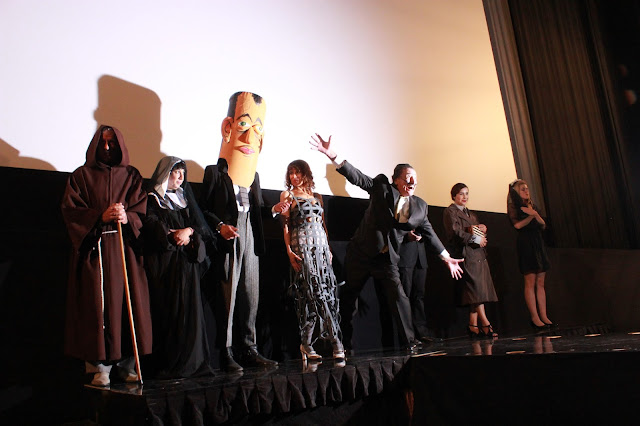 This Thursday, July 23, the Aero will screen The Discreet Charm ofthe Bourgeoisie as part of its 75th anniversary celebration. On May 21, 2014, the Egyptian hosted a celebration of all things Buñuel, the “It’s Been Surreal” Ball.

Oscar Arce, director of the Buñuel Institute and close friend of the Buñuel family, introduced the evening's three films as well as the elaborately staged audience costume contest. But first, he presented the Egyptian's own costumed "Buñuelian Tableau" to join him on stage. Among them, a figure dressed as Buñuel, complete with a papier-maché head in the Spanish born filmmaker's likeness, as well as Catherine Deneuve's beautiful blonde Belle de Jour character (clothed) in her floor length black veil and crown of white flowers. A mustachioed Salvador Dali waved to his fans. 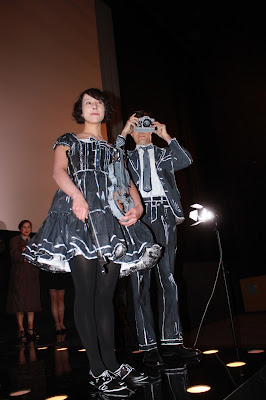 The contest began with Arce extending the invitation, asking the audience, “anyone that is surreal or kind of surreal” to please join them on stage.  Among stellar contestants, first place, judged by applause, went to the “photographic” couple.  They were wearing an artistic and excellently executed paper-like canvas suit and dress, carrying a violin of the same material. Second place went to The Lobster Lady.  Third went to a man named Pablo. Buñuel’s grandson and granddaughter were also in attendance.  In the courtyard during intermission, Marc Buñuel, whose father’s father was Luis Buñuel, shared memories and thoughts of his grandfather.

As the younger Buñuel was just a kid when Luis died, his most vivid memory of his grandfather was this: “He had receding gums and it made his teeth look really big, and he liked to scare us with his teeth.” Not so surprising, right?

Luis Buñuel spent the last years of his life living in Mexico City, and Marc and his family would visit. “It was an interesting experience and great adventure," he said.

About the crowd gathered at the Egyptian, he said, “He would be so excited that so many people are taking an interest in his films. He didn’t like to show off.  He was reserved and didn’t like too much publicity, that generation was completely different.  Today you have to promote everything. He was a rebellion for his time.  He felt that Spain was incredibly backwards.  He called it the middle ages.”

Buñuel explained that his grandfather left Spain for France, because of Franco, and that “The Nazis were there and Europe was in chaos.  He hated hypocrisy and social injustice.”
Visually, the evening's three films are wildly different. But, as Marc Buñuel said, “they are all comments on society and all surreal.” Bunuel collaborated with Dalí on the evening's first film, Un Chien Andalou (1929).  Exploring the subconscious, it is a nonlinear silent short, featuring a set of well-dressed characters living in a nightmare.

The second film, Land without Bread (1933) is a somewhat fictionalized documentary or that takes place in one of the poorest remote areas in Spain at that time, with real footage recording extreme poverty and untimely death. This film, along with Un Chien Andalou, has been digitally restored. If you’re a Buñuel fan, the evening’s third film, Belle de Jour (1967), is instantly recognizable for its lush world of glamour and couture of Paris during the 1960s. Putting the films in context, Marc said that his grandfather was interested in changing social norms.   “Belle de Jour is a modern vision.  It is surreal but a modern vision.” The Buñuel Institute works along with the producers who share the rights to the films, and coordinated this event. The year 2000 would have been Buñuel's 100th birthday.  The restorations were done by collecting all of the best negatives and really shine in a theatre because of the large format. Un Chien Andalou was banned by the Spanish government, Arce said, because it was “critical, showing Spain in a bad light.  The French were most accepting of his films, as he made them.”

“This is his true director’s cut.  There are 4 different versions. This one had not been seen. It’s now same way it was shown in Paris, restored to its highest beauty,” he said. Of Buñuel's 32 works, Arce said, “No two films are alike; they are inconsistent but leave a signature.” According to Arce, Bunuel did not subscribe to following the norm. “Film was a powerful medium … and his work commented on sexual taboos, politics, and power.” In conclusion Arce said, “Believe nothing. Question everything.” One costumed diehard fan commented, “I could see the dead baby in the documentary breathing.” For more information go to the Buñuel Institute's site. 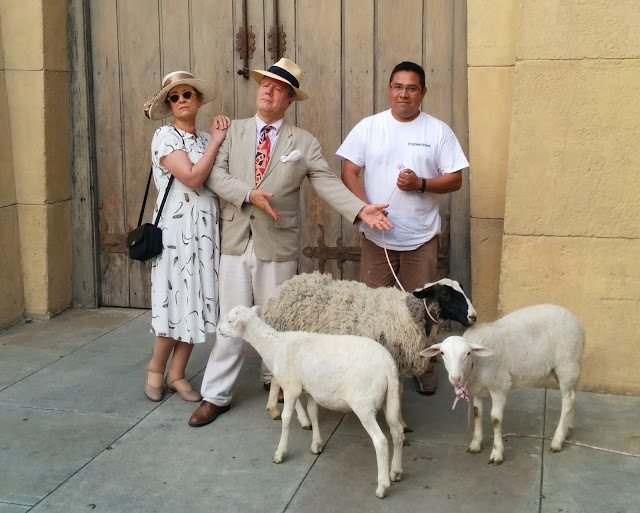