Paul Mazursky and Friends In Person at the Aero! 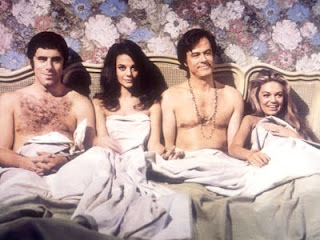 Thursday, November 19 - 7:30 PM
Double Feature: AN UNMARRIED WOMAN, 1978, 20th Century Fox, 124 min. Dir. Paul Mazursky. Erica (Jill Clayburgh) is a wealthy New Yorker whose stability is shattered by the breakup of her marriage. But she turns tragedy into triumph by seizing the opportunity to find herself via a new life and a new relationship.Clip

TEMPEST, 1982, Sony Repertory, 136 min. In Paul Mazursky's loose adaptation of Shakespeare's "The Tempest," John Cassavetes plays an architect who leaves his wife (Gena Rowlands) and moves to a Greek island with his teenage daughter (Molly Ringwald). Complications emerge when Cassavetes falls for Susan Sarandon and his wife shows up on the island with a new lover. Discussion in between films with director Paul Mazursky. Clip

HARRY AND TONTO, 1974, 20th Century Fox, 115 min. Dir. Paul Mazursky. Art Carney won an Oscar for his performance as Harry, an aging man who hits the road with his cat Tonto. Their journey is funny and touching in equal measures, thanks to Paul Mazursky and Josh Greenfield’s reflective screenplay and a supporting cast that includes Larry Hagman, Ellen Burstyn and Josh Mostel. Discussion in between films with director Paul Mazursky and actors Dyan Cannon and Robert Culp. Trailer

Since his directorial debut with BOB & CAROL & TED & ALICE 40 years ago, filmmaker Paul Mazursky has been one of America’s most reliable comic storytellers. He began his career as an actor, appearing in an early Stanley Kubrick feature, FEAR AND DESIRE, before going on to roles in THE BLACKBOARD JUNGLE and numerous classic TV series. Mazursky continued acting, but quickly became known as a formidable writer on series including "The Danny Kaye Show" and "The Monkees." After Mazursky and partner Larry Tucker wrote the script for I LOVE YOU, ALICE B. TOKLAS in 1968, they collaborated on BOB & CAROL & TED & ALICE, the film that would establish Mazursky’s voice as a director: that of a brilliant but humane satirist, capable of illuminating his characters’ foibles without condescension. Mazursky’s form of sympathetic satire evolved over the next several decades in classics like BLUME IN LOVE, AN UNMARRIED WOMAN and DOWN AND OUT IN BEVERLY HILLS, and he has continued to act in everything from "The Sopranos" and "Curb Your Enthusiasm" to his own films.