Cinematheque Members Give THE IRISHMAN a Warm Welcome by Judith Resell 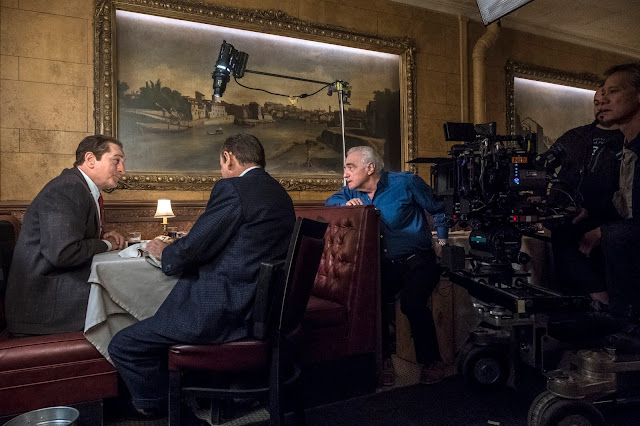 Martin Scorsese “wanted the technology to be invisible,” said cinematographer Rodirigo Prieto of THE IRISHMAN(2019). “Every camera angle has three cameras, not one, so that Scorsese could direct how he wanted, the actors could act as they wanted and I could light it any way I wanted.”

Prieto and IRISHMAN producer Emma Tillinger Koskoff appeared for a Q and A following a screening of the film at the AERO theatre on October 23, 2019, the night before its LA premiere.

“It was a blessing in disguise,” Tillinger Koskoff said of the difficult twelve years it took to get the film made. “The new technology made the time right.” When Netflix agreed to finance the project, motion capture technology was highly-developed and the remarkable cast headed by Robert De Niro, Al Pacino and Joe Pesci signed on.

“It was so amazing,” continued Prieto, “when you watch the performances, you totally forget they’re de-aged.”

“O my God, I can act for thirty more years!” Tillinger Koskoff laughed as she recalled the actors’ response to de-aging.

Because the story spans a long period of history, Scorsese wanted the feel of an old movie. A color scientist went to Kodak to get the color process right for different eras, Prieto recalled. Kodacolor for the fifties, Ectochrome for the sixties and the process of color in 2000. 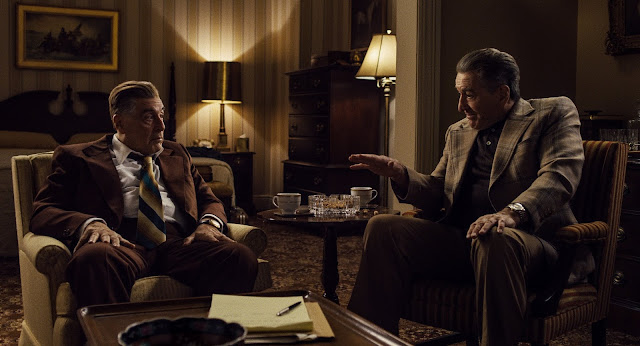 Another important visual choice was when to move the main characters from CGI to just regular make-up. Prieto and Scorsese wondered “when do we do the transition?” They decided on sometime in the sixities and used make-up and prosthetics for the characters who survive to old age, including DeNiro and Pesci.

The car sequences, a significant part of the film, were shot in the studio. Prieto explained that allowed him to shoot through the windows and to use billboards they “drove” past as lighting. Neither could happen on location.

“He’s not a typical director,” Prieto said of Scorsese. He made comments like “I’d like it to be more extreme,” leaving the specifics of how to do that up to Prieto rather than telling Prieto what lenses and camera angles to shoot. “Now I know what he likes and doesn’t like,” Prieto explained.

“The relationship between the cinematographer and director is huge,” Prieto continued. “Every single shot is the two working together.”

Prieto mused that, in a sense, everthing the actors do and everthing the audience sees has to go through a lens. So it’s crucial that the cinematographer knows what the director wants. You have to “really listen, really carefully, to the director, try to understand it, why he wants it. I’m the one who has to be flexible,” Prieto concluded.

As an example, he gave the type of shooting required to communicate the DeNiro character’s clockwork methodology. A Mafia hitman, he has to time it perfectly and make sure all the pieces are in place in the right sequence for a successful kill. He visually notes that everything and everyone is where they should be when they should be so he can complete the hit. 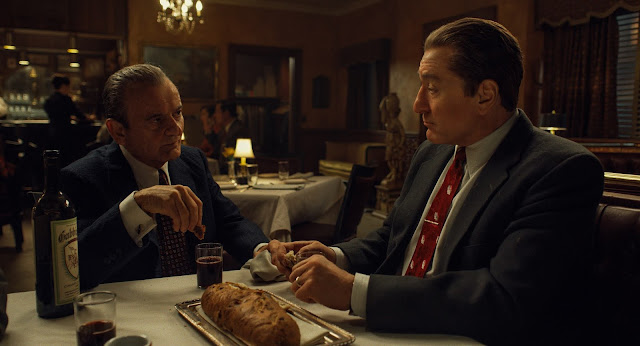 “It plays,” Tillinger Skoskol said when asked about the over three-hour length of the film. She added that an intermission was never contemplated and that “we got absolutely no negative feedback from Netflix” about it.

Prieto commented that there was no conscious effort to look like GOODFELLAS(1990) or any of Scorsese’s other movies. “But every filmmaker has his style. I have things I like and he has things he likes. It’s definitely there—his signature.” For example, graphic direct shots.

Asked if she believes that Frank Sheeran murdered Jimmy Hoffa as the book on which THE IRISHMAN is based contends, Tillinger Skoskol replied with a smile “I don’t know.”

“It doesn’t really matter,” interjected Prieto, whether the story is factually true or false. “Since we are telling it the way Frank sees what happened and it is told from his point-of-view.”