I AM A DEVOUT MARXIST, by Susan King

Before you think I’m going into a political diatribe, it’s not Karl Marx that I love, but Groucho, Chico, Harpo and Zeppo Marx.  It took a while to warm up to them, but once I became addicted to repeats of Groucho’s TV game show, You Bet Your Life, when I was I college I was hooked on their wild and anarchic comedy.


I even saw Groucho in person just about six months before he died in 1977 at the play “The Royal Family of Broadway” at the then-Huntington Hartford, and over the years I’ve had the opportunity to interview Groucho’s late son Arthur, his daughter Miriam and Harpo’s son, Bill Marx. Just this week alone, I got a cool new Marx Brothers T-shirt and the new Blu-ray restoration of “The Marx Brothers Silver Screen Collection,” which features restored versions of their best movies produced by Paramount: The Cocoanuts, (1929) Animal Crackers, (1930) which features newly discovered footage that was cut from the film in 1936, Monkey Business, (1931) Horse Feathers (1932), and Duck Soup (1933). 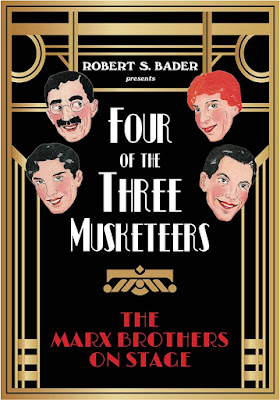 The American Cinematheque’s Egyptian Theatre in Hollywood is screening the restored “Animal Crackers” and some Marxian rarities on Thursday,October 27 at 7:30 PM.  Author Robert S. Bader will be signing copies of his new book, Four of the Three Musketeers:The Marx Brothers on Stage and will introduce the evening. I recently chatted with Bader on the book (by the way, there’s an excerpt of the book featured on the Blu-ray set) and the appeal of the Marx Brothers.

SUSAN KING:  Did you choose Animal Crackers to show at the Egyptian?


Robert Bader: Yes, absolutely. It’s the one where they found the missing material. There’s really fun stuff. When the move got reissued in the ‘70s it had a lot of jump cuts and things were clearly missing.


There's a scene where they're going to the bridge game where Margaret Irving walks into the frame and Harpo - he pulls her underwear out from the top of her dress with his teeth.


SUSAN KING:  When was that cut?


Robert Bader: In 1936. Post-Hayes Code, definitely. I read the script, so I know what was missing.  There are a couple of the edits that were done so deftly that you wouldn't notice anything missing unless you read the script, and then there are the ones where there's just a mess of jump cuts. There's probably something missing like the line in the ‘Captain Spaulding’ where he sings, "I think I'll try and make her."


SUSAN KING:  You are also showing rarities at the Cinematheque?


Robert Bader: We're going to show some rare clips. I am going to make this a surprise, I hope.


SUSAN KING:  Why did you call the book, Four of the Three Musketeers: The Marx Brothers on Stage? 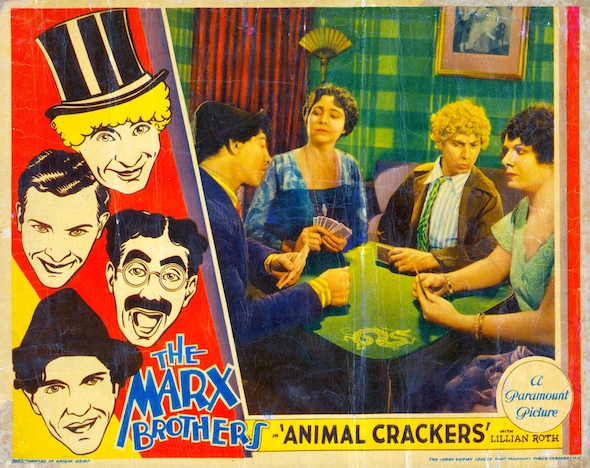 
SUSAN KING:  It’s pretty amazing to think the brothers had been on stage for over 20 years before they starred in The Cocoanuts, which was based on their hit Broadway show.


SUSAN KING: When did Chico join the act?


ROBERT BADER: He was doing vaudeville on his own with a couple of partners and he joined the three Marx Brothers in 1912 to become the Four Marx Brothers.


SUSAN KING: What about Zeppo?


ROBERT BADER: Gummo went into the army in 1918, right at the end of World War I. Zeppo at the age of around 17 took Gummo's place.


ROBERT BADER: There's a lot of stuff that got cut out from the stage play where it involved the group as a foursome. The act on stage often had a lot of material with all four of them working together in a bit.  In the early films, there's a lot of two shots.

SUSAN KING: Zeppo was kind of cursed with the fact that he had to go and take Gummo's place, Gummo who didn't want to be a performer, wasn't a very good performer. Zeppo had much more ability than he was ever allowed to show in the act.


ROBERT BADER: At least in Monkey Business he has a pretty good role. I think Horse Feathers, Monkey Business, and Duck Soup are  Zeppo's better pictures. He had a lot more to do because those were originally written for the screen and I think the writers were cognizant of the fact that [the brothers] worked very well as a quartet. 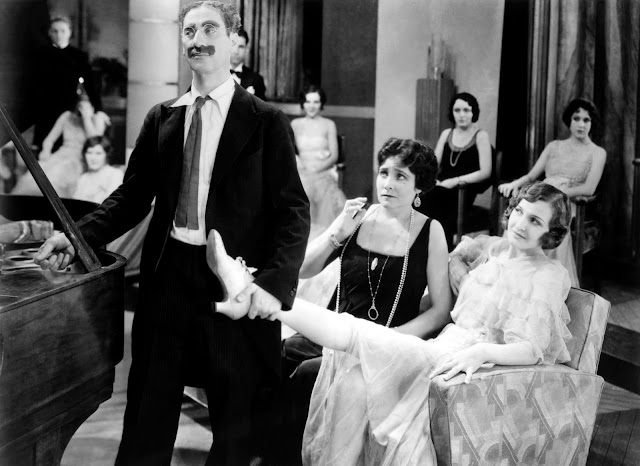 SUSAN KING: When they were on Broadway doing The Cocoanuts and Animal Crackers, did the brothers keep changing the dialogue?

ROBERT BADER: The legend is that they ad-libbed quite a bit. There’s the famous [legend] George S. Kaufman was in the back of the theater during Cocoanuts and he said, ‘hold on a second, I think I just heard one of the original lines!’ The truth is they stuck with the script as much as they could, but they would add jokes. Some of it's been documented because you can compare the script for something like I'll Say She Is, their first Broadway show.


It was late in the run of I'll Say She Is, they were competing with a lot of other shows and they would do things like discount tickets because they had a very large theater. They could sell $1.50 tickets and get a ton of people in there. Down the street they were having the roadshow of the movie The Ten Commandments. There's a line in the theatrical manager sketch in that show where someone asks Groucho, what has your theatrical experience been? The original line is, ‘Last season I was with The Covered Wagon. I played the axel grease.’ [editor’s note: Coincidentally, both The Ten Commandments and The Covered Wagon opened at the Egyptian Theatre in 1923] 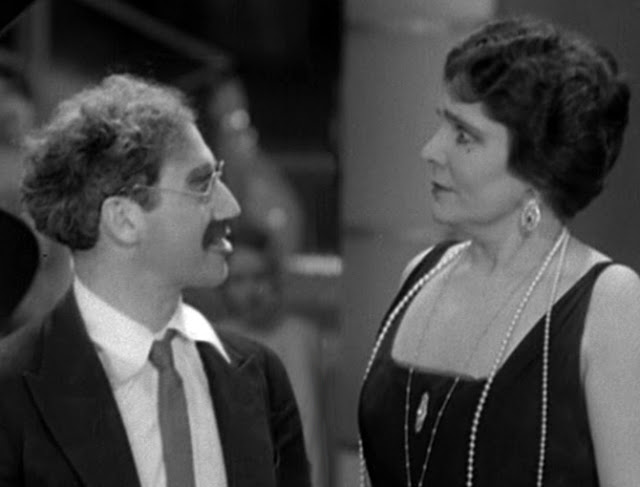 SUSAN KING: There’s always the legend that Margaret Dumont was clueless as to what was going on in the plays and films she did with the brothers?


ROBERT BADER: She was not clueless at all. She was a perfect straight woman.


She was brought to the Marx Brothers by the producer Sam Harris, who was the partner of George M. Cohan. Margaret Dumont was in a George M. Cohan play called The Rise of Rosie O’Reilly, Sam Harris, when he started working with the Marx Brothers a couple of years later, thought she'd be perfect for them. He brought her in and, obviously, she did the two Broadway shows and seven movies.


SUSAN KING: When the Marx Brothers, minus Zeppo - who left after Duck Soup - came to Hollywood to make movies, didn’t they try out scenes for audiences before they made the movie?

ROBERT BADER: Once they got to MGM, one of the things they really wanted to do was test out the stuff in front of an audience. They did a brief tour, just a few weeks, of scenes from A Night at the Opera. They did it again for A Day at the Races.

They took about five scenes from each film. They just honed those lines. They had a writer with them. In the case of A Night at the Opera, it was Morrie Ryskind accompanying them on the tour. They would try new lines, move things in and out. It was basically writing the script with the help of an audience.


SUSAN KING: Though A Night at the Opera and A Day At the Races the brothers made at MGM are classics, the rest of the films they made for the studio are major disappointments. What happened? 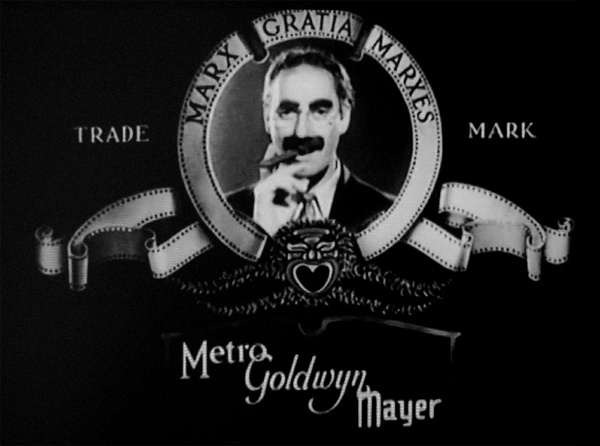 ROBERT BADER: Irving Thalberg signed them to his own MGM contract. In the contract was a clause that if Mr. Thalberg is unavailable for 30 days or whatever it was, the Marx Brothers can exercise the termination of the contract. Well, when Thalberg died, they were in the middle of making A Day at the Races. The Marx Brothers, upon completion of A Day at the Races, terminated the contract and left MGM of their own free will because they didn't like the future with Louis B. Mayer, who just was known to not like them. They made a deal to film Room Service at RKO and they actually signed a three-picture deal with RKO.


They got a huge amount of money. They got the most money they'd ever been paid for one picture for making Room Service.  RKO had spent the most money ever to buy the rights to a stage play for this film. This got a lot of hype, a lot of press, and it was a big money film. Before it even got finished, Louis B. Mayer got nervous because A Night at the Opera had been very successful and A Day at the Races was making a ton of money while this was all going on. He realized he just lost the Marx Brothers. What he did was, he signed them to a three-picture deal that would allow them to make the other two pictures at RKO.

ROBERT BADER: Room Service comes out, it's not great, it doesn't do well, and Mayer says, ‘oh great, now I've got these guys signed.’  He put them in the B picture unit. As it turned out, RKO was so disappointed in Room Service they never even asked them to make the other two pictures.


SUSAN KING: Five years after 1941’s The Big Store the three brothers reunited for A Night in Casablanca, which is their best film since Day at the Races.


ROBERT BADER: I do love A Night in Casablanca.


The Marx Brothers went on the road and did a small tour of the West Coast after that. That tour turned  out to be the last ever stage performances of the Marx Brothers.

Veteran journalist Susan King wrote about entertainment at the Los Angeles Times for 26 years (January 1990 - March 2016), specializing in classic Hollywood stories. She also wrote about independent, foreign and studio movies and occasionally TV and theater stories. She received her master's degree in film history and criticism at USC. After working 10 years at the L.A. Herald Examiner, she moved to the Los Angeles Times.