THIS SUMMER, THERE'S A CINEMATIC VOID FILLED WITH INSANITY, by Heidi Honeycutt

Cinematic Void is the brainchild of American Cinematheque programmer Grant Moninger and technical director James Branscome. It’s also an insane film party, usually packed into the intimate setting of the Spielberg Theatre, with giveaways, curated trailers, unexpected oddball extras, often costumes, and even special guests from the specially-selected films. The Cinematic Void films themselves are only familiar to the most die-hard cult, horror, bizarre and eclectic cinema fans (and even in that context, sometimes they’re obscure as hell).  Cinematic Void screenings are, according to Branscome, “an opportunity to screen some summertime horror favorites and mix in some serious deep cuts. Obviously things like The Burning or Friday the 13th don’t need much of an introduction. But introducing film fiends to the mind-bending lunacy of Wild Beasts and Demonoid is something special. Those are films that should be seen with a rabid audience. It’s also great to work with some of my favorite boutique home video labels: Severin Films and Vinegar Syndrome.” 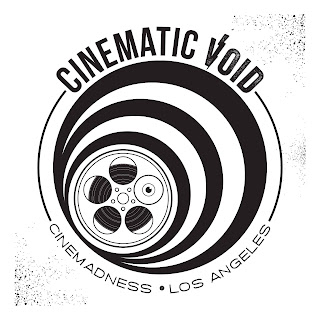 Vinegar Syndrome, Alamo Drafthouse LA, and Severin Films provide the titles for the summer series of Cinematic Void and its August sub-series at the Aero Theatre, Camp Void. David Gregory’s Severin Films specializes in releasing and restoring controversial and provocative features, while Vinegar Syndrome focuses on archiving and releasing exploitation films. With Severin and Vinegar Syndrome providing restored cinematic experiences, the Cinematic Void summer lineup generates a rare opportunity to see these extraordinary movies on the big screen with an actual audience. Cinematic Void brings some sleaze and obscurity to the otherwise respectable American Cinematheque and its iconic theatres: it’s not uncommon to find Moninger dressed in drag or some other costume during the party (as well as many other attendees) and personal appearances from forgotten (but beloved) stars of cult movies sharing their personal accounts with the rapt audience.  That audience, according to Jim Branscome, is made up of “horror fans, cult film aficionados, adventurous cinema-goers, and the criminally insane.”  Moninger, on the other hand, said when asked about the Cinematic Void audience, “I wish that drunk Heidi would stop asking me questions.”

On June 30th, in the Spielberg Theatre, the animals-gone-insane-themed Cinematic Void double feature of Day of the Animals and Wild Beasts kicks off the summer’s Void festivities. Day of the Animals features a shirtless Leslie Nielsen and a be-shirted Christopher George battling wild mountain animals that are driven mad by the depletion of the ozone layer, which makes sense.  Directed by Grizzly’s William Girdler, Day of the Animals has just about the same amount of bad animal attack footage, bad acting, and exploitation masquerading as cautionary environmentalism as Grizzly does, but with less bear and more cougars. Likewise, the second film, Wild Beasts, from director Federico Prosperi, is also about animals gone mad with rage, but instead of the giant hole in the ozone layer driving them insane, it’s PCP. Also in contrast to Day of the Animals, Wild Beasts takes place in the city, in Italy, in Italian with subtitles. Aside from these differences, both films indulge your darkest animal-revenge porn fantasies to the fullest extent.

On July 2, Severin Films presents a Cinematic Void screening of Burial Ground from a 35mm print courtesy of Grindhouse Releasing. Also an Italian creation, Burial Ground is chock-full of embarrassingly bad dialogue such as, “You look just like a little whore, but I like that about you,” and zombies that all appear to be wearing burlap sacks and have heads made out of papier-mâché. In true Italian 1970s low budget horror film fashion, the entire film is drenched in the color red and all the women should be modeling scarves for Italian Glamour. Men’s thick mustaches glimmer as not-scary corpses practically crumble into dust every time they’re touched, but that’s okay, because it’s Italian. The Burial Ground screening will include live music performances and giveaways from Severin Films.

On July 9, the Severin Films 10th Anniversary Party takes place with a triple feature courtesy of the Severin archives: Drive-In Massacre, Bag Boy Lover Boy, and Beyond the Darkness. Drive-In Massacre, directed by Stu Segall, is set in the lurid world of late 1970s California drive-ins in which a sword-wielding maniac kills unsuspecting theater-goers in their cars. The maniac is tracked by two boring, overweight police detectives. You’ll love it. Bag Boy Lover, on the other hand, is a relatively new addition to the world of sleaze, having been released in 2014. Directed by Andres Torres, who will be there in person, Bag Boy Lover follows young hot-dog salesman Albert as he poses for photos in the silly world of art photography, which seems to drive him insane and lead him to being covered in blood from head to toe.  Ending the evening is Joe D’Amato’s masterpiece of the insane-young-man-kills-people-and-makes-a-human-doll-out-of-her-corpse subgenre, Beyond the Darkness, in which we once again have the pleasure of watching stilted Italian actors.  Profoundly prolific filmmaker D’Amato also gave us the terribly enjoyable horror film Anthropophagus and the self-explanatory 120 Days of Anal, so Beyond the Darkness will be the perfect palate cleanser upon which to draw the curtain. 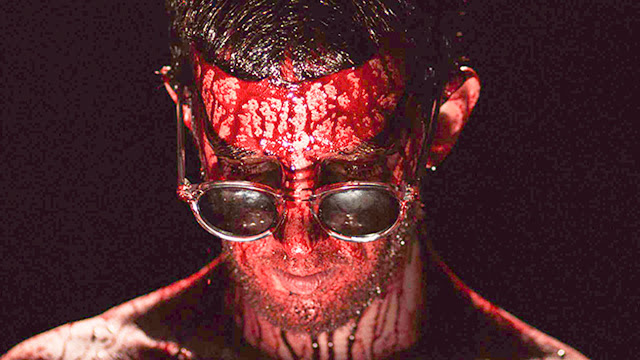 On July 15th, Vinegar Syndrome provides the films for the double feature of Demonoid and The Bees. Demonoid is the terrifying tale of a demonic humanoid (hence the name, of course) that harasses Samantha Eggar and Stuart Whitman with the threat of death and eternal damnation after it springs directly out of the ground. Remember how in the 1980s everyone was really terrified that killer bees from Africa were going to mate with American honeybees and produce super aggressive killer honeybees that would murder us in our own yards? That’s what The Bees is about! The Bees is an action/thriller/sci-fi hybrid starring John Saxon and John Carradine, and the bees come from South America, but the sentiment is the same: bees stinging you to death for no reason are awful. Director Alfredo Zacarias will be there to present both of his films and presumably he can explain the parts of the movies that don’t make any sense.

In August, Camp Void begins at the Aero Theatre in Santa Monica with, of course, camp-themed cult and horror films in honor of summertime. On August 5th, the triple feature of The Burning, Sleepaway Camp, and Twisted Nightmare is co-presented by the Alamo Drafthouse Los Angeles. The Burning is famous among horror fans for being the brain child of a young Harvey Weinstein and starring then-unknowns Jason Alexander, Fisher Stevens, and Holly Hunter. Tom Savini created the special effects for the Cropsey-inspired story of a burn-scarred maniac at a summer camp who enjoys killing teenagers. Sleepaway Camp’s star Felissa Rose will be there in person for the film, in which she, at age 13, portrayed tween Angela at a summer camp, who may or may not have been a maniacal killer and may (did) have a penis. Twisted Nightmare ends the evening. From 1987, Twisted Nightmare is basically a remake of Friday the 13th, but starring Cleve Hall: summer camp teenagers are killed by a handi-capable maniac seeking revenge against all teenagers everywhere. 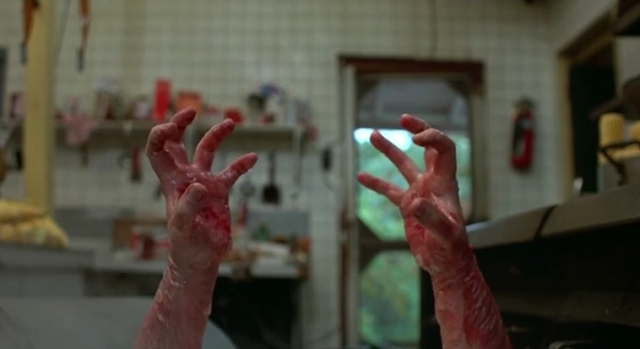 On August 19th, Friday the 13th, Sleepaway Camp 2, and Summer Camp Nightmare conclude Camp Void.  Friday the 13th needs no introduction, of course: it’s one of the most famous slasher films ever made, launching a decades-spanning franchise that would see villain Jason Voorhees in Manhattan, in space, and fighting A Nightmare on Elm Street’s Freddy Krueger. But before it was a tacky remake and reboot machine, Friday the 13th was a tasteful, terrifying slasher film about revenge and motherly love. Sleepaway Camp 2: Unhappy Campers features a grown-up Angela, now played by Pamela Springsteen, happily working at a summer camp despite the fact that she previously went insane and killed people at a summer camp. Springsteen is the sister of musician Bruce Springsteen and she would go on to star as Angela in Sleepaway Camp 3 before retiring from acting altogether. Summer Camp Nightmare was co-written by Penelope Spheeris (Wayne’s World) and director Bert Dragin. Perhaps the most important thing about Summer Camp Nightmare is that it stars Samantha Newark, who voiced both “Jem” and “Jerrica” on Jem and the Holograms:  the unanimously agreed-upon best animated TV series of all time.

Such an assorted lineup of films as the one Cinematic Void has compiled is much like the Cheerleader Effect: these kinds of movies appear far more attractive to watch when presented as part of an ongoing series than presented alone. Sitting at home, drunk, alone, sad, and watching one of these (often cringe-worthy) exploitation and horror films simply cannot compete with the experience of watching them all together in the theatre on the big screen, drunk, alone, and sad. Cinematic Void provides an experience that simply cannot be replicated: the enthusiasm of the crowd, the enjoyment of the festival, the laughter, or applause, or probably mostly laughter, and the first-hand accounts of how these films were made from the actual people that made them.

The aforementioned lineup does not even include all the films scheduled to play. To fully envision the chaos, fun, and nightmarish horrors of all that is Camp Void, best to watch the series trailer here:

Heidi Honeycutt is the programmer of the “Rack Focus” series at the American Cinematheque, including the women directors’ genre film festival Etheria Film Night (@EtheriaFN). When she’s not doing that, she’s writing for film magazines, watching pre-code talkies, or – wait, that’s all she does.
Posted by American Cinematheque at 2:28 PM
Email ThisBlogThis!Share to TwitterShare to FacebookShare to Pinterest
Newer Post Older Post Home